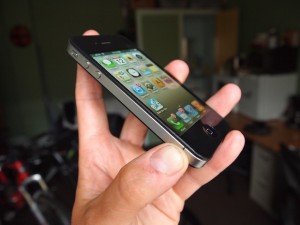 Today CNNMoney put out an article suggesting that the Consumer Reports “testing” had no data to support their claims.  According to Brian Klug, author of AnandTech’s Report “Apple fixed the problem” and “You can use the Wireless iPhone with no case without any concern for losing signal because of how it’s held”.

According to the CNN article:

The AnandTech study, however, showed that the Verizon iPhone performed roughly on par with its non-iPhone peers — and far better than the AT&T version — in terms of cell signal attenuation (a fancy word for the reception loss experienced when your hand covers the antenna).
Verizon’s device lost 16.5 decibels of signal reception when cupped tightly in the “death grip,” compared to 24.6 dB for the AT&T iPhone 4. The average signal loss of seven other smartphones that AnandTech tested was 14.4 dB.
When held naturally, the Verizon device fared worse than non-iPhones, but it still beat the AT&T iPhone by a fairly wide margin.